A downloadable game for Windows, macOS, and Linux

Overtired graduate student Charisse LaFlamme picks up a part-time job editing a small academic journal. Her first task is to sort through a long backlog of emails that the previous editor never dealt with, deleting anything that doesn't look useful. As her university's email servers slowly sync the data and more and more old emails show up, a stranger starts messaging her to angrily insist that she stop deleting them. But Charisse needs to get paid, so she isn't going to let some random internet weirdo interfere with her work—no matter how bizarre some of the old emails get.

A largely text-based game made in about a month for NaNoRenO 2019. Contains some elements of supernatural and psychological horror, but nothing graphic and no jump scares. You're more than welcome to download this game for free, but if you'd like to donate a few dollars, it could really help with my future development projects. And if you get stuck at any point in the game, you can consult the official guide.

Let's All Get Along~31 days ago

This was such an intriguing visual novel! I was really intrigued at how you were able to come up with the plot, especially regarding the more sinister undertones about what Frost did to his wife and Ruby which is just heartbreaking because I can honestly see this in real life. I also enjoyed reading through Morgan's lines even though I shared Charisse's annoyance on how they explained this so vague and just basically demanded Charisse to do the opposite of what she was supposed to do, Ruby felt a bit lacking as an antagonist but the ending was quite a brain turner. SPOILERS UNDERNEATH!!!

I was curious about the ending of Morgan's Route wherein at the ending we see a photo of Charisse but she has and overshadow of someone, especially with the way her words were worded made it sound like it wasn't Charisse herself who said it. I'm thinking that the reason why Morgan was able to "get" Ruby was because the girl had already decided to possess Charisse, as seen when her shadow gets bigger and bigger through the screen, and so without Ruby there Morgan thought they had successfully captured her when in reality she had escaped by possessing Charisse (especially with the ending of the conversation between Charisse and Morgan).

I also think that instead of destroying the old things, it seems as though both Charisse and Ruby came to an agreement that the only way to "destroy" the past was to look to the future and block the past by pouring in information wherein you wouldn't need to look back on it.

And I think in Ruby's Route, Charisse met the same fate as Morgan being stuck in a burning building, though in the message I'm not sure if it was Ruby who burnt the office to silence everything (either she had been ordered by Frost or she did it out of a sick attempt to stop people from prying into Frost's "books" that he "wrote himself" and seeing evidence) or if it was someone totally unrelated.

Besides from that, I don't think Ruby is truly gone and instead both she and Charisse have merged into one which defeats Morgan's purpose, I hope they're okay somewhere and that maybe Charisse and Ruby have calmed down or something. Great visual novel! Really made me think and want to punch the everloving hell out of Frost!

Thank you so much for the lovely long comment! I love to see people really thinking about my writing. That's exactly why I left some of it ambiguous - I think it's a lot of fun to come up with your own ideas about what something meant, and see if other people are on the same page. I'm really glad you shared your thoughts! :D

This was fantastic! Love a good spooky tech story. You walked the line between comedy and horror really well.

I've put this in my show case on my itch page, if you'd rather I didn't just let me know and I'll take it down. :)

Oh that's so nice, thank you! I'm happy to have it in your showcase. Thanks for commenting and sharing it with others. :)

This was fun! The antagonist gave up too easily, but it's still quite good!

It's not a coincidence that the protagonist's initials are "CL", is it?

Can you explain the motivation of the antagonist?

That went from 0 to 100 fast. Interesting game to say the least. I kinda wish there was a third option where I did a bit of both deleting and replying.

Here's my channel for other games I have played http://www.youtube.com/c/Levont

I played it! I wanted to reply at Lemmasoft like I promised, but the site is not loading for some reason. ANYWAY! This game gave me a really creepy atmosphere, I loved it! I felt like certain mysteries were left to interpretation, but I may have a theory? I'll let you know at Lemmasoft to avoid spoilers. What made this game extra creepy for me was my virus protection freaked out, so I had to add it to the exceptions list lol. I got what I assume is the "good" ending first, then I tried for the bad ending which I felt added another piece of the puzzle to my theory. Some of them e-mails were whacky, and some were legitimately WHAT THE HELL for me. Haha. Anyway, good use of the e-mail and reply code, it's one of my favorites for Ren'Py ^^

Thanks, I'm really glad you liked it! Looking forward to seeing your theory. :D I do like to leave some things ambiguous and see what different interpretations people come up with!

Yes, haha. Btw, did the cosmic microwave reference Steins;Gate by any chance? =P

Yeah, Lemmasoft is really freaking out. I got some kind of SQL error so I screencapped it. Not to freak you out since this happened after your game, this error is amusing me because of it. xD

I'll admit that little connection is totally unintentional! I asked my scientist friend to come up with a few science-y names for papers and that happened to be one of them.

Hahaha that is an interesting coincidence, but it still made me think of Steins;Gate none-the-less (since I love that VN to pieces).

Yeah I love it too, that's where my name comes from. :D

Oh looks like PyTom said the forums are down, phew I am not the only one. Oh well, still added to the creep factor after playing your game. Haha, really good job in making it, I love games with a creepy atmosphere rather than jump scares, it lasts much longer... like me freaking out about clearing my cache to get Lemma to work, but it's literally just down right now.

Not bad at all! Short, but intriguing. 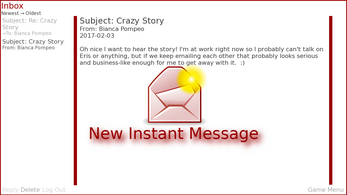 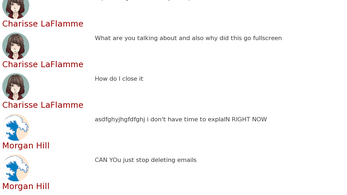 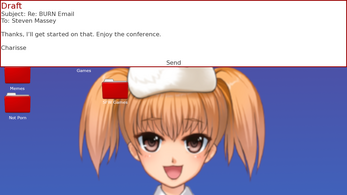 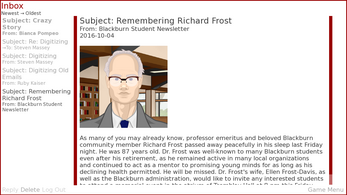